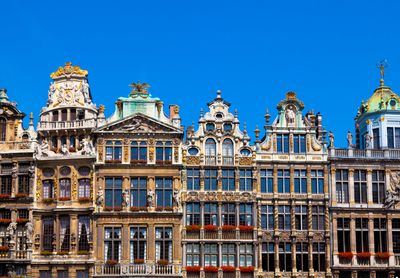 Compare & Save on car rental in Brussels

Brussels has changed hands many times in its history, becoming the Princely Capital of the Low Countries in the 15th century, and later coming under the Austrian crown before being annexed to France during the French Revolutionary Wars. After the defeat of Napoleon at Waterloo Brussels became the capital of the province of South Brabant, part of the United Kingdom of the Netherlands. The Belgian Revolution of 1830 saw the newly crowned King Leopold making the city his capital, and he planned major works during his reign. The River Senne was entirely covered over, and the old city walls destroyed. The Belgium capital was occupied by the Germans during the First and Second World Wars but suffered only minor damage – some would say that the urban regeneration of the 1950s and 60s resulted in rather more! The majority of the city’s population are French-speaking, although all public signs and literature have to be in French, Flemish and German. Today Brussels hosts many of the major institutions of the European Union, including the Commission and the Council of the EU, and Brussels Airport is one of the busiest in Europe.

Things to Do in Brussels

Locals recommend using public transport to get around the centre of city, and arranging car rental to tour the many sights in the wider locality. Booking online through GoCarRental.com not only provides you with the best deals but also a choice of car rental collection points in the city. The Grand Place is undoubtedly the most beautiful part of the city, and the centre of a quarter which has numerous little bars and restaurants, chocolate shops, medieval cobbled streets, and historic buildings. A must-see for any visitor to Brussels is the famous Mannekin Pis, the small bronze statue which has been endlessly copied and is supposed to represent the irreverent spirit of the Bruxellois.

The Atomium is still a symbol of Brussels – the futuristic structure created for the World Fair, Expo ’58. The Musée des Beaux Arts de Belgique is an enormous building which houses both modern art and the work of the Old Masters. For enthusiasts of the Art Nouveau style the Victor Horta Museum is a delight. As Belgium is the home of the creator of Tintin the Comic Strip Centre has not only examples of Hervé’s work but a lot of other fun comic book characters. And for another Belgian speciality Les Galeries Saint Hubert, a 19th century shopping arcade and gallery, has an endless choice of chocolate shops.

Driving in the city centre can be a fairly fraught experience for the visitor, with signing notoriously confusing or absent on multi-lane roads, a confusing network of shopping streets, and often anarchic parking. The recommendation is to stick to public transport to explore the inner city, and use car rental for venturing further afield to the historic city of Leuven, or to the Abbaye de la Cambre or the Atomium on the outskirts of the city. There is an inner, pear-shaped ring road and an outer ring road from which major European motorways lead, the A10 and A12 to Ghent and Antwerp in the north-west, Leuven, the A16 to Breda and Rotterdam, and the A4 to Luxembourg. For exploring around Brussels, use the more relaxed N roads and local roads, often named rather than numbered.