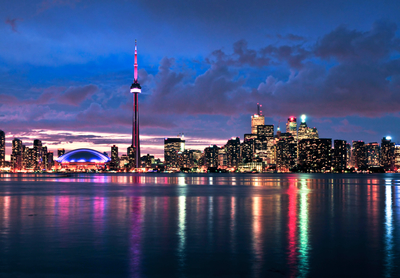 Compare & Save on car rental in Toronto

Toronto is the most populous city in Canada, and is situated on the shores of Lake Ontario in the south-east of the country. It was originally founded by the British in the 18th century as the town of York, but in 1834 it was incorporated as a city and renamed Toronto. The city has suffered two disastrous fires in its history, in 1849 and 1904, both of which caused extensive damage. The city is surrounded by a region known as the Golden Horseshoe, for its wealth and population, and with the American cities of Detroit and New York within a half-day driving distance, the attraction of Toronto to tourists and as an important trading centre is understandable. The city houses not only Canada’s Stock Exchange but also the country’s five largest banks. Toronto is not only one of the most ethnically diverse cities in Canada, its many different districts and variety of architecture reflect that diversity – from the towering skyscrapers of the financial sector to the attractive “first planned city” Edwardian houses of the Annex and Rosedale.

Things to Do in Toronto

Toronto is an easy city to drive around, and to take full advantage of the city and its surrounds, car rental is the best option. Finding the most suitable vehicle and the best value deal can be done through GoCarRental.com ahead of your visit. A good place to start getting your bearings and a spectacular view of the city is the CN Tower, once the highest tower in the world at 553 metres tall. Visitors can brave the glass-floored stage at the observation deck, or head to the highest viewing point at the Sky Pod (447 metres). No visit to Toronto is complete without going to view the Niagara Falls, an easy hours drive away, and one of the most spectacular waterfalls in the world.

For a glimpse into the rarefied world of the mega-rich in the 19th century, visit the extravagant mansions of Casa Loma, or Spadina Historic House and Gardens, once the home of financier James Austin. Both the Royal Ontario Museum and the Art Gallery of Ontario are worth a visit, as much for their spectacular architecture as for their fascinating collections of historic artefacts, sculpture, and contemporary art. Toronto has lots of quirky local areas which it’s fun to explore on foot – from the rural charm and fruit and vegetable market of Riverdale Farm to the Distillery District, America’s best preserved collection of Victorian industrial architecture, now being converted into arts centres, restaurants and bars. And finally, Lake Ontario offers outdoors enthusiasts all that they could wish for in swimming, walking along the lakeshore and exploring Toronto Islands.

Driving in the city is relatively straightforward, as long as you remember some basic rules about driving on the highways, some of which have 8+ lanes in each direction. The major highways are divided into “collector lanes” and “express lanes” – for the new arrival, it’s probably safer to stick to the collector lanes with exits 1 – 2 kms apart. Highway 407 is an electronic toll road, which can prove expensive is you are driving a hire car, so it’s best avoided. The two major routes into downtown Toronto are the Don Valley Parkway and the Gardiner Expressway. Both have a 55 mph speed limit. The Ontario QEW and ON-420E will take you from the city to Niagara Falls and the American border.