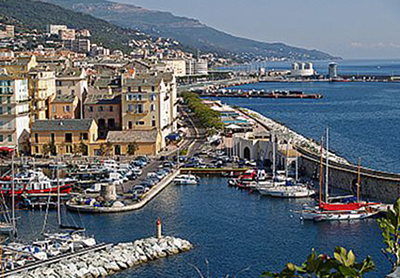 Compare prices and save money on your car rental in Bastia.

So you are going to Bastia and you are looking forward to exploring its beautiful region. Well, great idea! But before leaving take a minute to compare car hire prices on GoCarRental.com. In this way, you will find the best low-cost hire car and enjoy your Bastia stay without concerns. Bastia is part of the Haute-Corse department and Corsica’s second most populous city, right after Ajaccio. It has been labeled "City of Art and History,” a well-deserved title for a city as rich in cultural heritage as Bastia is. Among the must-see sights, there is a wonderful palace formerly home to the Genoese governors, splendid inheritance from the past days of Genoa’s domination over the Mediterranean Sea. This ancient fortress originally served as a bastion to protect the old port. Nowadays it is used by the city museum, replacing in turn the Corsican ethnology museum since 2010. This fascinating Governor Garden is accessible from the museum and is integral part of the citadel. The next sight to discover is the Church of St. Mary. This fifteenth-century former cathedral was totally renovated in the early seventeenth century. Right behind it, there is the Holy Cross Chapel where the Christ of Miracles has found shelter and veneration by the most pious citizens since its restoration from the sea by a group of sailors at the beginning of the fifteenth century. Do not miss Saint-Jean-Baptiste Church either, one of Bastia’s symbols and a very nice spot overlooking the old port. Commenced at the end of the sixteenth century and built on for many decades, this peculiar church displays an interesting conflation of styles. The façade is classical in style while the inside decorations are in the eighteenth-century baroque mode. Finally, take also a look at the turret of the Casabianca submarine, a wonderful remnant from the Second World War in everlasting memory of the strenuous Corsican resistance to the Nazi occupier. Formerly standing in the Palace of the Governors, the turret is now exposed in Place Saint-Nicolas. This is its history in short. In November 1942, after fleeing the port of Toulon, the submarine Casabianca took part to a secret mission codenamed "Pearl Harbor" in order to set the stage for the island’s liberation with the aid of the Allied forces. For a relaxing walk, stroll in Bastia and stop by the terrace of a little café or restaurant in Place Saint-Nicolas or in front of the Old Port.