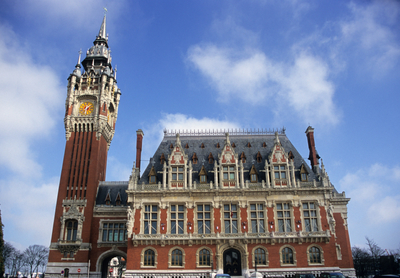 Compare & Save on car rental in Calais

Calais is a major port and ferry port in northern France, and the Eurotunnel has enhanced its links with the UK even further. Given its proximity to England – it overlooks the Straits of Dover, the narrowest part of the English Channel – it has always provided an important trade route between the two countries. The English annexed the town in the 14th century and occupied it for over two hundred years before the French retook it. Much more recently,, it suffered severe damage in the Second World War, and most of the old town was destroyed and, unlike many other French cities, there was no real attempt to restore the ancient buildings. Calais is often seen as a city just to drive through to destinations deep in France, but it offers a lot of attractions in its own right, as does the coastline that stretches from Calais down to the estuary of the Somme. It is still a thriving fishing port, and the lace industry, for which it has always been famous, continues to employ upwards of 8,000 people. Arranging car rental in Calais for when you arrive on French shores gives you all the advantages of having a vehicle that is already fully equipped with the safety equipment that its obligatory for you to carry when driving in France – and you will be in the correct driving position, with significantly better visibility than if you were driving a right-hand drive car. Find the right vehicle for you with GoCarRental.com.

Things to Do in Calais

The Town Hall, an extraordinary red-brick building in the Flemish style with a turreted clock tower, is worth a visit, not only for the gardens with the famous Rodin sculpture “The Burghers of Calais”, but also for its interior. You can visit the first floor with its fine panelling, stained glass window and memorials to those killed in the two World Wars. Taking the lift to the top of the clock tower provides breathtaking views over the city and the port. The Musée de la Dentelle gives the history of lace through the ages, from the hand-crafting of the original lace-makers to modern machine-made lace.

The Musée de la Guerre is housed in an old German radio bunker, and provides a vivid sense of what life was like for the citizens of Calais during the Second World War. The 15th century Eglise Notre Dame, badly damaged in the war, and still being restored, is well worth visiting for the beauty of its exterior, and the very English style – the only one of its kind in France. On a rainy day, the Royal Kids Parc de Jeu makes for a great visit for the whole family – the activities range from go-karting to a kids disco. On the coast, the resorts of Etaples and Berck-Place are great places for watersports and for sampling that great delicacy of northern France, “moules et frites” - mussels and chips.

Unless you stray into the suburbs of Calais, the city is easy to drive around, with the main roads laid out almost in a grid pattern and routes out of town clearly sign-posted. With car rental arranged, the whole of France is easily accessible on long-distance routes from Calais. Three major autoroutes leave the city, heading towards Belgium, (A16) Paris (A16 south) and Reims (the A26, known as the “route des Anglais”).