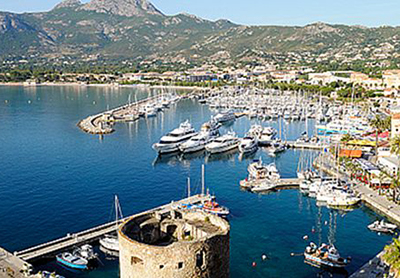 Compare prices and save money on your car rental in Calvi

The best way to discover Corsica and the area around Calvi is by renting a car. On GoCarRental.com, we can help you finding the best rental car and save a lot of money. Calvi is especially worth it. During the years the city has decidedly steered towards summer tourism, eventually developing large and comfortable receptive structures that range from campsites to four-star hotels. Notably, Calvi also has the largest marina in Corsica. Numberless ships dock in the Bay of Calvi throughout summer. Located in the lower part of the town, rue Clemenceau is an entirely pedestrian-only area with tons of cafes and restaurants. Walking on the Landry Quai you will find the above-mentioned marina. However, Calvi has other many interesting valuable landmarks. Take the church of Santa Maria Maggiore with its alluring pink façade; or St. Antoine’s oratory and its entertaining and instructive cultural events; or then again, Saint-Jean-Baptiste’s Cathedral situated in the upper town’s Genoese bastion. The inside marble garnishing in Saint-Jean-Baptiste casts an impressive aura of majesty all around it. The Citadel is the historical symbol of Calvi along with the Tour du Sel. Calvi has remembrance of its military past, so roaming through the city you will discover the precious sixteenth- and seventeenth-century rests of the former Genoese palace (now the Genoese palace hosts the Foreign Legion parachutist regiment.) Though historically captivating, Calvi has its trump card in a beautiful and large seaside. La Pinède, one of the most famous beaches of the area (and deservedly so), in summer is easily reached by the Trinighellu, a small train that tours the nearby beaches. Here seaside areas are quite-well equipped in terms of restoration and other facilities. Additionally, you can here play water sports - mainly sailing, diving, and jet skiing – in the schools and rental agency on the beach. If you are looking for wilder and less packed beaches, the Revellata peninsula is your cup of tea. It is a protected natural site with strong winds howling from the sea and an outstanding biodiversity with rare plants only to be found there. At the very top of Revellata you can find its beacon. Overall, the peninsula is ideal for wandering in the midst of nature. To explore the charming and mysterious Corsican backcountry, though, it is better to get aboard your car rented via GoCarRental.com.