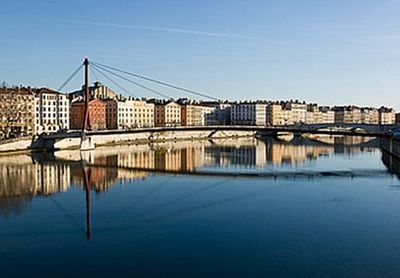 Compare & Save on car rental in Lyon

Lyon is over 2,000 years old, and was an important settlement in Roman times, as evidenced by the Roman ruins at Fourvière and recent excavations. It is the capital of the Rhones-Alpes region, and a UNESCO heritage city, recognised for its history, culture and gastronomy. The inhabitants of the original Roman city of Lugdunum fled the city after the acqueducts fell into disrepair, and the city only really regained its prosperity in the golden era of the Renaissance. It became a major financial centre, and at one point in the 15th century the French king was even considering replacing Paris with Lyon as the capital of France. The silk weaving and printing industries founded the wealth of Lyon, and silk weaving continued to be an important activity until the end of the 19th century. Modern day Lyon has thriving industrial, financial and commercial centres, including a rapidly developing IT industry. The city has excellent transport links, with the high-speed train service connecting it to Paris and the south of France, and a hub of major arterial roads and autoroutes, making it the ideal place from which to explore the region. The international airport is a half-hour’s drive from the city.

Things to Do in Lyon

The city has undergone major restoration and renovation work over the past two decades, and a delight for the visiting tourist is to stroll through the streets of the old city and of the old silk-weavers quarter, the Croix-Rousse. The traditional covered passageways, or “traboules” have been restored, and one of the most delightful is the Passage Thiaffait, which houses a variety of craft workshops and studios and little cafes. The Roman history of the city can be explored with a trip to the fascinating Roman amphitheatre at Fourvière, where the Basilique Notre Dame de Fourvière is also worth a visit for its extraordinary ornate interior.

Roman amphitheatres – at Fourvières and Croix-Rousse

The 12th century Romanesque and Gothic Cathedral of St Jean at the edge of the old city has some glorious stained glass windows and an interesting exhibition on the history of the site. The Mur des Canut is the largest street mural in Europe, and depicts the lives of the inhabitants down through the ages. For fine dining (and Lyon is famous for its gastronomy), shopping and nightlife, the Presqu’Ile district is the place to go – the handsome 17th century Hotel de Ville and Opera House can also be found here. Outside the city there are numerous vineyards and chateaux to visit close by, and having arranged car rental in Lyon through GoCarRental.com you can enjoy touring the Lyonnais region. Top Three Attractions Roman amphitheatres – at Fourvières and Croix-Rousse Mur des Canuts street mural Musée des Beaux Arts

Driving in the city can be challenging, and visitors are well advised, when arranging car rental, to make sure that the rental vehicle has a satnav system. Some might prefer to leave their car at the hotel where they are staying and travel around the city on the excellent public transport system. For exploring the region around Lyon, which is close to the mountainous national parks of the Ardeche, the Vercors and the Chartreuse, a car is essential. A network of motorways spreads out from the city in every direction, the A7 running south to the historic city of Orange and down to the Mediterranean, the A40 leading to Geneva, and the A89 leading west to Clermont-Ferrand.