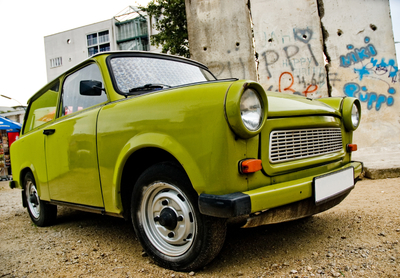 Compare & Save on car rental in Berlin

Berlin is the capital of Germany, the largest city in the country, and the seventh most populous in Europe. Down the centuries it has been successively the capital of Prussia, first recorded in the 13th century, and then of the German Empire, the Weimar Republic and the Third Reich. After the Second World War it was divided, along with the rest of the country, into East and West Berlin, and the notorious Berlin Wall was constructed by the authorities in East Germany to prevent their citizens escaping to the West. With the reunification of Germany in 1990 and the historic fall of the Berlin Wall, the city once more became the capital of the whole country, and the centre of government. Much of the city has been rebuilt in the years following World War II, with the pace of modernisation accelerating after reunification. Berlin today is an immensely attractive city with many green spaces, parks and gardens, and is famous for its museums, theatres and galleries, as well as for some of its restored historic landmark buildings and monuments. Arranging car rental before your arrival in the city with GoCarRental.com provides you with the chance not only to explore Berlin itself but also to visit all the fascinating historic regions and cities nearby.

Things to Do in Berlin

For many, the starting point for exploring the city is the Brandenburg Gate, in earlier years a symbol of division, but now a major memorial to a city once more restored to its rightful place at the heart of the country, and representing the peace that has been achieved at the end of the Cold War. The western part of Berlin is home to many of the theatres and clubs that make up the city’s vibrant nightlife, and the Kurfürstendamm, one of the city’s most elegant shopping quarters. Berlin’s Museum Island, a UNESCO World Heritage site, houses one of the most important museum complexes in the world.

For a feast of historic and cultural artefacts, some of the greatest paintings by the Old Masters, and a museum dedicated to pre-history, it offers days of interest to the visitor. Close by the Brandenburg Gate is the memorial designed by the New York architect Peter Eisenman to the Jews who perished in the Holocaust, and for those interested in the infamous history of the Gestapo under the Third Reich there is the Topography of Terror centre in the previous headquarters of the Gestapo. For a glimpse into more recent history, tourists can take the Berlin Wall trail, which follows the line of the Wall, and takes you through some of the city’s artistic and craft quarters.

For visitors arriving at Berlin’s Tegel Airport, picking up their car rental and driving into the city is an easy trip – just 8 miles and 17 minutes from the airport to the centre of the city. Berlin is comparatively easy to drive around, with major routes running east to west and north to south through the city, but be prepared for very frequent traffic lights slowing your progress in the centre of town. Berlin drivers are very rule-abiding, but can be quite aggressive, like all city drivers. Make sure that you acquaint yourself with the traffic rules and regulations before your trip – the speed limit in the city is 50 kph, and in areas without stop signs traffic to the right takes precedence. You should always pass on the left. There are on-the-spot fines for contraventions, so make sure that you have memorised the key rules.