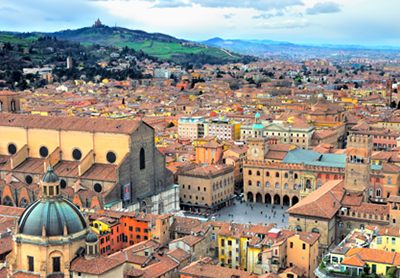 Compare & Save on car rental in Bologna

The city of Bologna hosts some important cultural, economic and political institutions and it is one of the most advanced exhibition centres in Europe. A rental car may be the most effective solution when you travel from the airport "Guglielmo Marconi" to the city, crossing its nine districts very easily; but most of all, renting a car in Bologna is the best way to move in its extended metropolitan area, home to some of the greatest financial, industrial and cultural companies of the North of Italy. A rental car can be a cost-effective and efficient way to move for those who are traveling for work, having the great advantage of arranging your own schedule autonomously, without relying on taxis and public transportation.

Things to do in Bologna

Bologna isn’t just a city of culture where you see famous squares, churches, towers, palaces, city walls and the long arcades, but it is also home to leading academic institutions, such as the Alma Mater Studiorum, University of Bologna, which is the oldest uni in the Western world. Moreover, Bologna also awarded the UNESCO title of "Creative City of Music". A rental car allows you to move from one city to another hand very quickly, so you can easily visit all the architectural and cultural sights scattered in every corner of the city.

Bologna is also an important railway junction at the national level and an essential traffic hub. If you have to stop in Bologna during your trip, you can rent a car and reach your hotel quickly and cheaply, and come back to the station just as easily and independently the next day.