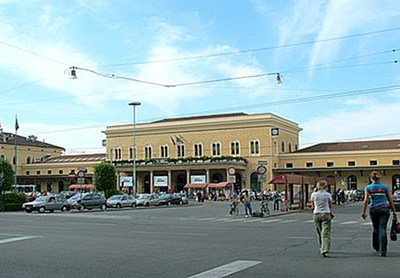 Compare & Save on car rental in Bologna Central Station

On GoCarRental.com you can compare all the low cost car rental companies operating at Bologna Central Station, in order to choose the best solution to have Emilia-Romagna at hand! Book now the car you like on our search engine, get down of the train and pick up your rental car with no effort at all! Since the time of its founding in Etruscan times, Bologna is placed in a strategic location between northern and central Italy, being an important junction for anyone who wants to cross the peninsula. The Bologna central station is the right place to enjoy the many options that this beautiful city can offer you.

Things to do in Bologna

Take a moment to visit this wonderful city with your rental car and in a few seconds you’ll drive along via Indipendenza, you’ll see the statue of Neptune in front of you, and then you’ll be at the castle of King Ezio and to the Town Hall in Piazza Maggiore. In just a few seconds later you’ll see the famous Two Towers on top of you. Stop for a moment to enjoy a whiskey at the Roxy Bar, as a famous song used to say, but if you want to enjoy the best of this city head to the Seven Churches, discover the magical corners of the University the theater. Stay at Via del Pratello and discover all its quirky pubs, take a walk in the Giardini Margherita Park before going back to your rental car and heading over to the Bologna hills, in order to watch the city from above and stop for a tasty and traditional dinner made of tortellini and tigelle.

Book your car hire at Bologna Central Station, and you can easily head over to the Apennines Sasso Marconi. In just a few seconds you'll be on the streets of Bologna and you’ll be able to seize Via Emilia and explore the whole region in a moment, towards Modena, Reggio and Parma. You can even enjoy the summer heat and head for the Adriatic Coast with you rental car! Don’t wait any longer, book on GoCarRental.com the car you want at Bologna Central Station, and your trip to Emilia Romagna will never be the same!