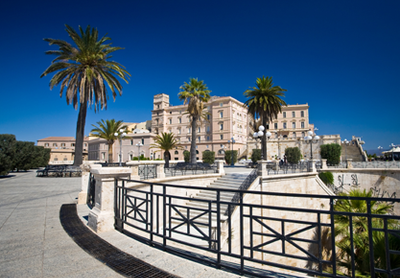 Compare & Save on car rental in Cagliari

Cagliari is the capital of the island of Sardinia, and is located at the heart of the beautiful Golfo degli Angeli. Its Sardinian name, Casteddu, means “castle”, which gives an idea of the history of the city, which dates back about five thousand years. It is built, like Rome, on seven hills, beneath which lie a necropolis linked to the Carthaginian occupation, and a Roman era amphitheatre. The Spanish built fortifications to defend the town, and there have been a series of castles and fortifications raised on the hill of MotniCastru. The city is also famous for its Art Nouveau architecture. The modern port is one of the largest in the Mediterranean, and the city is one of the most thriving and prosperous commercial centres in Italy.

Things to Do in Cagliari

Cagliari has any number of attractions for the visitor to explore, but anyone wanting to gain full advantage of the glorious beaches of Sardinia and the dramatic interior of the island will want to arrange car rental to tour the island. Not to miss in Cagliari are the old town, with sweeping views over the bay, and many ancient buildings to explore. Most of the ancient city walls are still intact, and the medieval Torre di San Pancrazio and Torre Dell’Elefante, with the sculpture of an elephant high on its walls, are a must to explore.

The Romanesque Cathedral of Cagliari with its wonderful sculptures and alterpieces offers a peaceful and beautiful space out of the bustle of the city. The Basilica of San Saturnino was damaged by Allied bombing but has been restored to show the remains of a 6th century Christian church. No visit to Cagliari is complete without a trip to the Poetto Beach, with its 5 miles of pale golden sand. Molentargius Park stretches between the city and the sea and was once the site of a thriving salt industry – the salt pans can still be seen, along with flocks of pink flamingos.

Cagliari Elmas Airport is 5 miles northwest of the city, and is the main international gateway to the island. A car is essential for getting to know the island outside Cagliari, and sorting out the best car rental deals in Cagliari through GoCarRental.com before you travel is the most convenient way to arrange your rental car. Getting from the airport to the city is a straightforward and short drive on the E25. Cagliari itself can be complicated to drive around, with different districts bisected by the Staini di Molentargius, so a satnav is a must to avoid getting lost. Many of the coastal and mountain roads can be narrow and winding, so the motorist has to stay alert and drive with care. Better to pull off at a convenient stopping point to admire the view than to risk getting distracted as you drive.