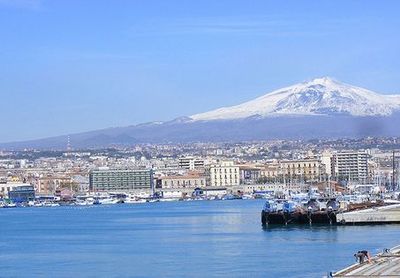 Compare & Save on car rental in Catania

Catania is the second-largest city in Sicily, and is located on the Ionian Sea, on the east coast of the island, between Messina and Syracuse, lying below Mount Etna. It was founded in the 8th century, built the first university in Sicily, and is today a thriving centre of technology – Sicily’s own Silicon Valley. Reminders of the city’s history are everywhere, from remnants of Roman baths and Roman amphitheatres to the 13th century castle built by Frederick of Hohenstaufen. The city was also the birthplace of the composer Bellini, and there are a number of statues devoted to him, as well a museum. The surrounds of the city are dominated by Mount Etna, the tallest active volcano in Europe. To explore the mountain, the coast and the countryside of Sicily the visitor needs to arrange car rental to give them the freedom to tour the island

Things to Do in Catania

The Teatro Romano, itself built on a Greek amphitheatre, is an atmospheric and extraordinary reminder of Sicily’s past. The Castello Ursino is an imposing fortress housing a museum with Roman mosaics and some fine Renaissance paintings. The Monastero dei Benedettini is a fine example of Sicilian baroque style, and a UNESCO World Heritage site. The Piazza Duomo is in the heart of the city, and is surrounded by architectural treasures, including the Cathedral of Santa Agata. The famous Fontana dell\'Amenano is found in the Piazza, and there are numerous inviting small cafes, restaurants and bars that line the square.

Outside the city, the ruined castle of Aci stands on a promontory looking out to sea and there is a small café on site serving ice creams and drinks to the thirsty visitor. And of course no visit to Catania can be complete without a trip to Mount Etna. Driving on roads cut through ancient lava flows and a lunar landscape is an experience in itself. You can opt to take the cable car to the crater, or a 4x4 trip. Hardy souls may want to trek from the car park base, but be warned – the terrain is a very tough one to walk over.

Car rental in Catania is a must for the visitor wanting to explore outside the confines of the city, and the best deals can be found right here with GoCarRental.com. Getting from the airport on arrival to the city centre is a short drive of 8 miles, following the E25 motorway. Getting used to driving in Sicily by taking the main route out of the city on the E25 to Serrenti and beyond is recommended before venturing on to some of the narrower winding mountain roads. The SS195 is a stunning scenic route to Pula along the coast.