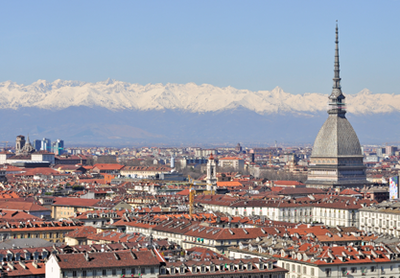 Compare & Save on car rental in Turin

Turin (Torino in Italian) has grown very rapidly in the last three decades, and has developed into an important business and commercial centre. It’s the capital of the Piedmont region, and much of the city is built along the left bank of the River Po. The city is known for the richness of its cultural life, with numerous galleries and museums and a famous opera house. The architecture ranges down the centuries from the Romanesque to Art Nouveau. Turin is also famous for being the “automobile centre of Italy”, with Fiat, Alfa Romeo and Lancia cars all being made in the city. The site of the city was originally settled by a Celtic tribe, the Taurini, who were driven out by Hannibal, after which the town was developed by the Romans. Like a number of the city states in Italy, Turin was occupied and governed by many different regimes, including the Dukes of Savoy, and the French under Napoleon in the 18th century. Badly damaged in the Second World War, it was rapidly rebuilt, and has built a flourishing manufacturing as well as tourist industry.

Things to Do in Turin

Its location in north-western Italy makes Turin the ideal base for touring the Alps and the Italian and French coast. Explore car rental options right here with GoCarRental.com to find the best rental deals. The city itself has many attractions, including its open piazzas and numerous churches. Of these, amongst the most interesting is the little church of the Santuario Basilica la Consolata, with its unusual interior layout and the paintings created by people thankful for a response to a prayer to the Madonna.

Museum of the Automobile

The Royal Church of San Lorenzo was the first home of the Turin shroud after it was brought to Italy, and has an extraordinary and colourful baroque cupola. The Piazza San Carol and the Piazza Castello are wonderful open squares to spend time in, and the latter is surrounded by some of the grandest buildings in the city – the Royal Theatre, Library, and the Palazzo. For something a little different, the Pietro Micca Museum provides a fascinating glimpse into siege warfare, with an account of the four-month siege of the city by the French in the 18th century. Many of the battles were fought in tunnels below Turin, some of which can still be visited today.

Ideal as a base from which to explore the region, visitors are advised that the pollution-reduction regulations that have been introduced to certain areas of the city make driving complicated for the residents, and even more so for visitors. Many people plan to spend some time in the city and then arrange car rental in Turin so that they can tour the Italian and French Alps, visit Lake Maggiore, well worth the two-hour trip, or take the A6 autostrada down to the coast at Savona. Alternatively, arrange to collect your rental car on arrival at Turin airport, a 30 minute drive from the city centre on the Raccordo Torino-Casalle.