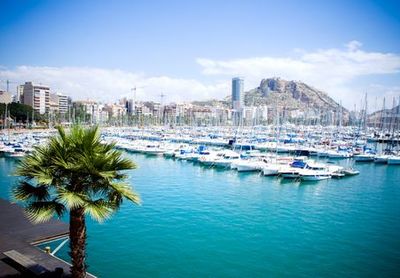 Alicante is a thriving city and port on the Costa Blanca, flanked by mountains and sea, and provides the visitor with an ideal base for exploring the surrounding coast and the eastern provinces of Spain, as well as the chance to enjoy the lively nightlife and attractive beaches.  The Explanada de Espana is a feature of the city, a pedestrian walkway along the seafront, with its dramatic black, red and cream marble, and avenue of palm trees.  It’s definitely the place to see and be seen in Alicante.  The Cathedral of St Nicholas towers over the picturesque old quarter of the city, “El Barro”, with its narrow winding streets and many little bars and cafes.

Things to Do in Alicante

The city can boast several impressive beaches, but they can get crowded in the height of the summer, and a car is really a necessity if you want to explore further afield.  There’s no problem arranging car rental, Alicante offers options to collect your car from the airport or from locations in the city.  For the city beaches, try El Saladar, which has sand dunes, a long stretch of golden beach, and all the restaurants and bars that you could wish for.  Away from the seafront, the city offers some cool and attractive parks, including El Palmeral, with waterfalls, a palm tree plantation, and children’s playground.

There are numerous opportunities to explore the history of the city, and a good place to start is the Castillo de Santa Barbara, one of the largest medieval fortresses in Europe. As the place that claims to have originated tapas, you can be certain of finding mouth-watering places to eat in the city, and the very best and freshest of seafood.

Benidorm is only a short drive from the city, and well worth a visit for its outstanding beaches and party-all-night lifestyle.  Further afield, Guadalest Costa Blanca is a two hour drive, but worth it for the location – perched on a mountain ridge – the serenity of beauty of the village, and the backdrop, the Sierra de Aitana.  Close by are the dramatic Fuentes del Algar waterfalls.  You would be well advised to book a satnav in preparation for driving your rental car around Alicante, to help with navigating your way around the city and the surrounding countryside, but the roads are all good and less busy than most in the UK.