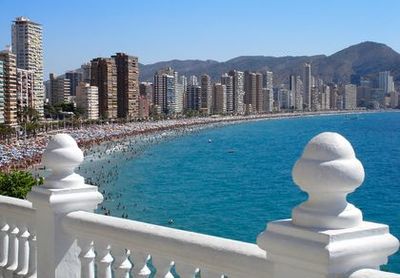 Benidorm is a seaside resort on the Costa Blanca in the Spanish province of Alicante. It is well-known for its links to the UK; the population is partially comprised of British retirees, and vacation-making Brits flock there during the summer months. Indeed, it was built as a compact resort to cater for the burgeoning tourist market in Southern Spain during the 60s, since when it has slowly spread west. It is famous for high-rise hotels and apartment blocks that serve the budget and package-vacation market, although Benidorm has recently undergone a transformation and now attracts tourists to world-class hotels and spa complexes. As a result, Benidorm has transcended the \'18-30\' reputation it had during the 80s and 90s. And deservedly so: the town has some stunning tree lined avenues, potted with bars and restaurants, more than 41,000 hotel beds and a vibrant summer nightlife. Daytime temperatures rarely drop below 18 degrees Centigrade, even during the winter months.

Things to do in Benidorm

Among Benidorm\'s biggest assets are the 4 kilometres of Blue Flag beaches attracting Spanish, German, Italian, French and, yes, British tourists all year round. The jewel in the crown has to be the Levante Playa, but for a more sedate route to the rays, many visitors plump for the Poniente Playa, which saw a 13 million Euro overhaul in 2009, adding a spectacular promenade and boardwalk.

As a purpose-built beach resort, everything is geared towards fun in the sun, so culture vultures looking for historical sites of interest are best heading to Andalusia or northern Spain. Nevertheless, the surrounding towns and villages are worth exploring by car, offering a taste of provincial Spain (especially the beautiful old town of Altea just 12km away) and there is a modestly attractive church in the old town of Benidorm itself. Car rental in Benidorm is relatively cheap and widely available. Though not necessary for a strictly beach-based vacation, the more adventurous tourist may get the itch to leave the confines of the town and see the more parochial parts of the region.

To explore the surrounding areas properly, car rental in Benidorm is essential. The best walking routes are well worth driving to – outlying villages like Finestrast and Albir require transport, and though buses are available, nothing beats having your own transportation. GoCarRental.com has a comprehensive selection of vehicles – visit their site to learn more about car rental in Benidorm.