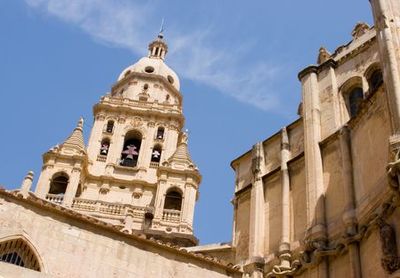 The city of Murcia also gives its name to the wider region, and is the capital of the south-eastern region of Spain.  The name originates from the Moorish “Mursiyah”, the city being founded during the Moorish occupation of Spain by the Emir of Cordoba.  It is built on the banks of the Segura River, and the surrounding area is known for its orchards, fruit and flower growing.  The old town area of the city is almost entirely pedestrianised, and visitors can stroll around the ancient streets and admire the magnificent Cathedral and the Market de Veronicas.  The history of Murcia is evident is many of its buildings, including the Almudi Palace and the castle of Monteagudo.  The bridges that span the river are also an interesting feature of the city, and range from the beautiful 18th Century stone Puente de los Peligros to modern bridges designed by well-known Spanish architects.

Things to Do in Murcia

A visit to the Cathedral de Santa Maria is a must for all visitors to the city, with its magnificent stone carvings, Baroque frontage, and 25 individual chapels in the interior.  The streets surrounding the cathedral are full of excellent tapas bars, and a short stroll away is the beautiful building of the Real Casino de Murcia, built in 1837 but strongly influenced by Spain’s Moorish past.  Although now a private club it’s still open for tours by the public.  The Episcopal Palace in Cardinal Belluga Square offers a highly ornamented and impressive frontispiece and amazing wall frescoes in the interior.

Murcia has two outstanding museums, both dedicated to local artists – the Museo Salzillo, displaying works by the sculptor Francisco Salzillo – and the Museo Ramon Gaya.  If you have organised car rental then well worth a visit is the watersports complex of Mar Menor, close to Murcia Airport, where tourists can water-ski, kiteboard, and take tuition in sailing and kayaking.

Driving in the city of Murcia is a pleasure compared to many other Spanish cities.  Newly upgraded roads avoid the jams of the past, and there are a number of access roads that lead directly to the city centre.  Coming from Murcia Airport, a 30 mile drive, the route follows the Autovia del Mar Menor (RM 19) until it reaches the A-30 which leads the motorist directly into the heart of the city.  Hiring a car with GoCarRental.com to get around the city and the surrounding area is advisable, and the best plan for the visitor is to organise car rental from Murcia Airport.  Day trips to the golden beaches of the Costa del Sol and the cities of Cartagena and Alicante are all easy to plan from Murcia with a car.