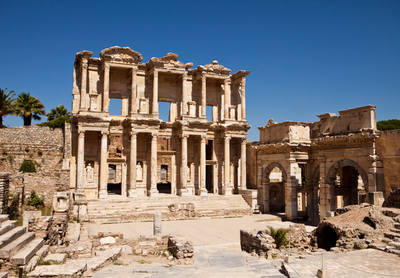 Compare & Save on car rental in Kusadasi

Lying on the west coast of Turkey, basking on the eastern shores of the Aegean, Kusadasi is home to just 50,000 people – but this number swells significantly in summer thanks to the town’s huge popularity with European travellers. Acting as a great gateway to Ephesus, it has become the Mediterranean’s fourth-busiest cruise port. A popular package vacation destination you’ll find plenty of resort or self-catering options. Beautiful beaches, year-round warm weather, delicious seafood, and lots of bars and accommodation available, it’s an ideal getaway for travellers looking for nightlife, some time by the sea, and a pleasant base from which to explore Turkey further.

Things to Do in Kusadasi

The great news for families is that Kusadasi is essentially geared around their vacation needs. This means there is not one but two huge waterparks that kids will just love. Aqua Fantasy is Europe’s biggest aquapark, spread over a mammoth 45 acres, while nearby Adaland claims to be one of the top ten in the world, and it’s free for under-threes. Within the town itself a walk around the ancient city walls and Kusadasi fortress will appeal to those with a love of history. And if you’re looking to hit the beach, head for Kadinlar Denizi. It lies just to the south of the town, and is served by many large hotels. Popular as it is it remains nicely laid back, even in the height of summer.

Kaleiçi Camii - a mosque dating back to 1618

Guvercin Adasi, or \'Pigeon Island\' - home to a castle and swimming beaches

Kusadasi’s nearest airport is İzmir\'s Adnan Menderes Airport, which serves up plenty of car rental options. Thanks to the modern six-lane highway, the city is also well linked up to the airport as well as towns to the north, south, and east. If you fancy exploring outside of Kusadasi, head for Ephesus, one of the major and best-preserved Greco-Roman sites in Turkey, which is just 20 minutes away by car. Also fun to explore is Dilek Peninsula National Park — about 20 min south of Kuşadası, packed with lush forests, hiking trails, and quite secluded beaches too.