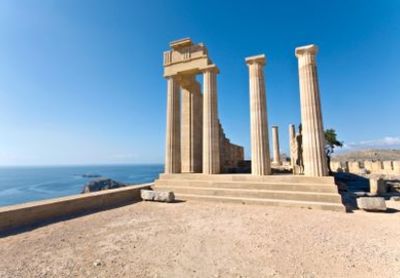 Compare & Save on car rental in Rhodes

Rhodes is one of the most visited of the Greek islands, and also the largest. Lying to the south east of Greece, its location means that the climate is particularly good, with sunny mild weather year-round. Its climate, along with its abundance of beautiful beaches, fascinating archaeological sites, and its large medieval town centre, have made Rhodes one of the most popular Greek tourist spots. Its close proximity to Turkey means it’s also a great destination for travellers looking to explore what both Greece and Turkey have to offer too.

Things to Do in Rhodes

Most visitors to the island go out of their way to make a trip to Rhodes Old Town – and it really is worth it. Famous as the former site of the Colossus, one of the seven wonders of the ancient world and the oldest inhabited medieval town in Europe, Rhodes Old Town is packed with archaeological and architectural wonders. Just 2km southwest of the Old Town you’ll also find the Acropolis of Rhodes, the ruins of the ancient city that once stood here.

The Ancient Ruins at Kamiros

Resorts dotted around the coast offer up something far more modern, while those looking for a more active vacation will find plenty to keep them busy. The surfing and kitesurfing are especially good along the west and south coasts of the island, while Mount Attavyros presents a challenging 2-3 hour climb to the Rhodes’ highest point (1215 m). Top Three Attractions Castle of Monolithos Exploring Rhodes Old Town and Acropolis The Ancient Ruins at Kamiros

Rhodes is a surprisingly large island, so to really get around having your own car is a real advantage. You’ll find car rental agencies available at the airport, ferry ports and at all major hotels and resorts, and while you can bring your own car, it’s typically far easier and cheaper to hire one, especially when booking in advance online at GoCarRental.com. A trusty network of asphalt roads allows you to explore the whole island, but if you’re heading further inland and off the beaten track expect to encounter plenty of winding dirt paths too.